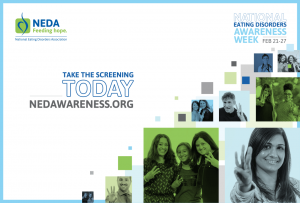 I’m going to be honest. I didn’t pay much attention to this being Eating Disorder Awareness Week until today. I know, at least in theory, that many survivors also deal with eating disorders, even though I haven’t been one of them. I even knew what the statistics say about the number of people who are, or have, dealt with eating disorders.

But, I didn’t write about it because it hadn’t impacted me, and I really hadn’t talked to anyone about the connection between child abuse and eating disorders. In fact, as much as I hate to admit it, I didn’t follow my own admonition. I wrote, a long time ago, that Yes You Do Know Someone With Mental Health Issues. In that post I talk about how the statistics make it plain as day that we all know people who are dealing with mental health issues, but who haven’t opened up to us. Well, I looked around and didn’t see anyone I knew dealing with an eating disorder, so mentioning this awareness campaign just didn’t get on my radar.

So, I’m encouraging anyone who may be dealing with this now, to take a few minutes this week, and seek out some information, and help, if needed. Don’t suffer in silence. I may not know much about eating disorders, but I know plenty about suffering in silence with a mental health issue, and I know that no one should have to do that.

This is an important story. It tells the story of a young girl and how she wound up a victim of sexual abuse at the hands of her gymnastics coach. The reason this is important is that it’s become clear we have a problem with sexual abuse in sports, and her story, or some version…

I heard someone on the radio use this phrase to describe herself as we were out grabbing a few last-minute items to assist with riding out Hurricane Ida. She was talking about evacuating her home in New Orleans at 10:30 last night, driving to Alabama to seek shelter, and then doing the show remotely from there.

Here, we aren’t in as much of a need to evacuate, we are further from the coast and the storm surge, but it’s still going to be a long, dangerous couple of days. So, we are spending a lot of time, and both mental and physical energy, preparing to possibly be without power, for needing to leave if the house is damaged, and so forth. It’s a lot. And that is on top of all the mental energy necessary to deal with large COVID outbreaks we’ve had in recent weeks, all of the recent events in world news, and the various personal and professional challenges that we are also dealing with.

Running on fumes is a really good description of how I think most of the entire state feels today, and yet, there’s a storm coming that we are all going to have to deal with, while everything else just continues on as well.

I noticed something quite odd the other day, and while it immediately made sense to me, I think to most people, this probably wouldn’t seem completely normal. I got to thinking about the long term effects of child abuse, especially sexual abuse, that we just don’t really think about, or that really aren’t worth spending…

Psych Central today mentioned a Men’s Health article written by Adam Duritz, of Counting Crows fame. It caught my eye because, in it, Adam talks about his struggles with dissociation, something that I have had problems with in the past, and something I don’t tend to see written about very often, outside of the more…

I haven’t decided if this is a sign of just being an introvert, or just a sign that I still have so far to go when it comes to interacting with people. I mean, I know being an introvert means that being social and being around people is work, and even though I enjoy it,…

Last night I stumbled into the #sexabusechat on Twitter, mostly by happening to be looking at twitter when it started up more than by design, I have to admit. The topic of the evening was on generational abuse, and how it carries down from one generation to the next. In response to the question of…