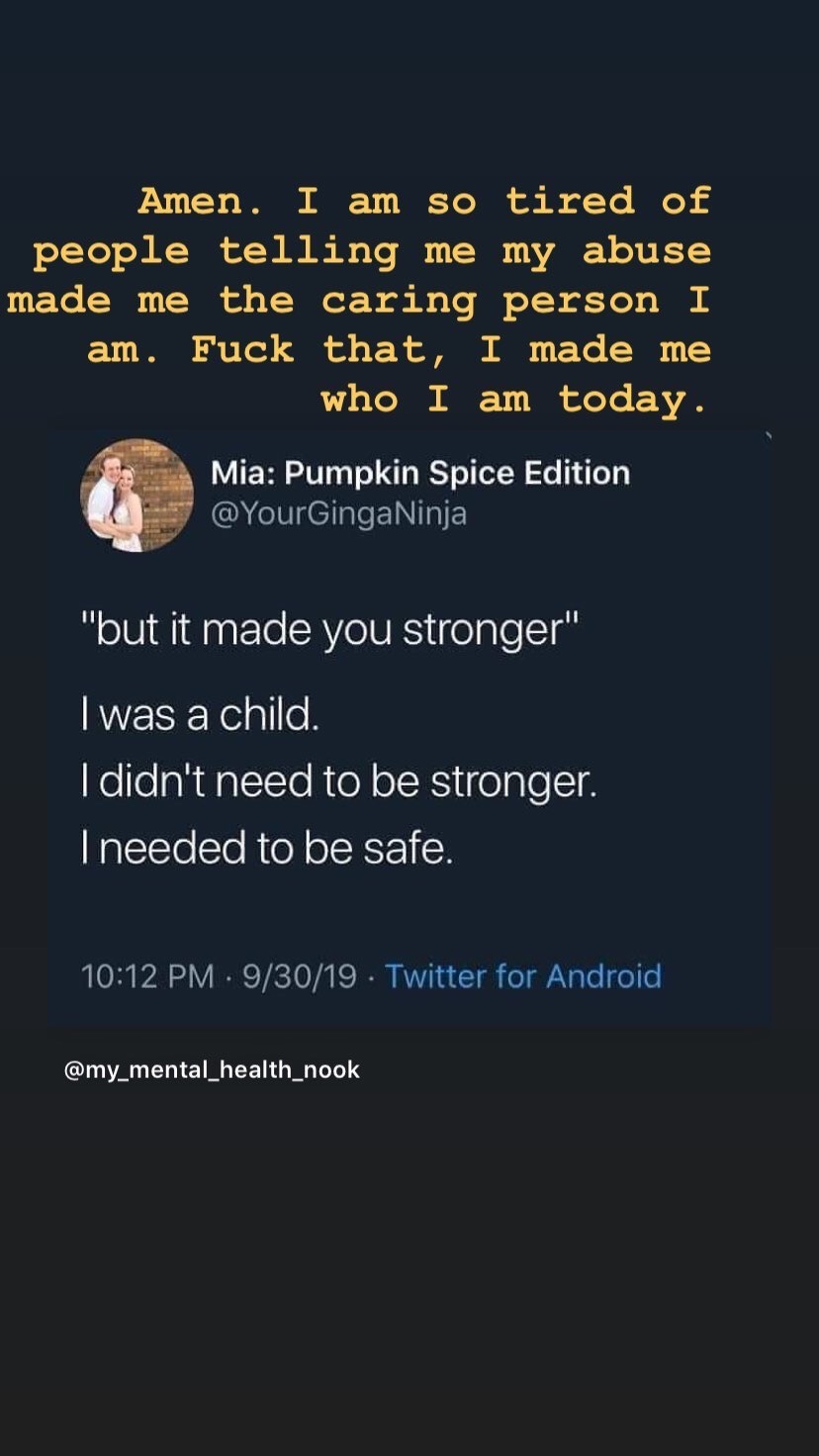 If you follow this page on Instagram or Facebook, you may have seen this less-than-family friendly story yesterday. Yes, it’s true, I sometimes curse up a storm. 😉

In this case, I do feel like it’s justified, because I think the original message hits something on the head that has been bothering me for weeks now. As I make my way around the blog and social media mental health communities, I come across this idea every so often that sounds so fluffy and nice, but is complete garbage. Perhaps the worst case I’ve seen recently will help you understand why it makes me so angry. A few weeks back I was watching a show on mental health that I normally support and try to share. The guest that particular day, who shall also remain nameless, was someone who for lack of a better term is a “gratitude life-coach”.

Now, I have nothing against finding things to be grateful for even on our hard days. There’s a lot of science behind the idea that finding those things helps our mental health tremendously, but where she went off the rails for me was when she particularly starting talking about abuse and other things that we may have suffered in our past. Naturally, she started out by saying the abuse “of course” wasn’t our fault, but then she quickly starting talking about re-framing all of these “bad” experiences, (Yes, she used air-quotes) going on to explain that we needed to stop thinking in terms of what happened “to” us and instead think of things that happen around us, or even “for” us, as the universe’s way of using pain to push us towards our true purpose in life.

That was the point where I quit watching, and began reconsidering my support for the show all the way around.

And this is where the image comes into play, because I will never accept that my abuse was anything other than some other person making the decision to abuse me. It was not about some greater purpose in my life, it was not karma, it was not a nudge from the universe, it was a criminal act conducted by another human being. End of story.

Notice that the logic that these folks use to explain why “bad” things happen always seems to  come down to explaining why “bad things happen to good people”. Which, as we’ve discussed previously, is just a fact of life, not something that needs to be explained away. We don’t talk about a murder victim being nudged toward their purpose, we talk about the tragedy of a life that is now over. Why should any other crime get this soft-shoe treatment to explain away the reason for it?

Let me tell you my truth, and it has nothing to do with life being fair to me, because life isn’t fair.

I was abused by people who made the decision to abuse me. I did nothing to cause it, and there was no lack of purpose to which I needed to be directed. I was a little kid being beaten, and eventually molested, for years. My purpose in life was to be a little kid. There was nothing fair about it, there was no sense to be made of why it happened, it was the result of another person’s actions which happened to be directed toward me because I was there. And, I was there by chance. Not by divine interference, just random chance.

As to what I became as an adult? Again, this was not the universe, this was me, with some more random chance mixed in. Yes, I now advocate for survivors online and try to share my voice and the voices of other survivors so that we can all be aware that we are not alone. I decided to do that. I could have just as easily decided to not seek out therapy, and remained bitter and angry toward anyone and everyone as an adult. I could have easily died any number of times during my really bad mental health struggles, Would we blame the universe for that? No, of course not, THAT decision, would be my fault, apparently for not learning how to be “grateful” for being abused.

So I guess all those kids who didn’t survive, or the survivors we’ve lost to suicide, addiction, and any number of other maladies were just collateral damage in order for the universe to reach the ones with a purpose? Or did the universe get the dosage wrong and give them too much pain in the pursuit of their purpose? Or maybe the universe didn’t realize that they lived in a poor urban area, third-world country or rural area with no access to mental health care?

I don’t think any of that makes sense. I don’t think there’s any way to force that to make sense. I think trying to make sense of that only exposes you as someone too afraid to admit the world isn’t fair and can be completely random. That you might be a victim, or get sick, or be hurt, for no reason.

If I, and other advocates, have done anything positive in our adult lives it’s because of two things.

I will never be “grateful” that it happened to me, or to anyone else. It shouldn’t have happened. It was a crime against us, not a lesson to be learned.

If you’ve been following along in the comments below, you know that the big thing I want for this site, more than anything else, is to have it become almost a community of survivors. That’s absolutely the goal I have in mind, but it’s the details that are the stumbling block. I mean really, what…

I’m thinking today about what really excites me. What really makes me feel alive. Two things leap to mind, one the love of my wife, and the other learning something new. I get totally jazzed and excited when I start to talk to people and share ideas and learn from our conversations. I really feel…

Douglas Welch ran an older column of his recently on his website. Not everyone is happy when you change. So much of it reminded me of what can often happens to survivors going through the healing process. Usually, those around us, our friends and family, are supportive of our changes. They want to see us…

No, the easiest way to break up those circles, as any kid who threw rocks into the water can tell you, is to throw another rock and create new concentric circles starting from a different location.

Gee, in my metaphor about the trauma I wonder what those other rocks could be? Mental health treatment? Care and support from family and friends? The elimination of stigma attached to trauma?

How about instead of ignoring the circles we started throwing some more useful rocks and disrupting the cycles of trauma that we see repeated over and over again in those circles?

Leah pointed to an interesting blog that is all about Jewish survivors of sexual violence. While I’m not Jewish, I’ll be reading it and keeping an eye out for common issues that affect all survivors. 🙂 I’ll have more to say later, it’s been a crazy-busy couple of weeks but things should get a little…

Maybe you have seen the headlines in the past week or so about a new discovery, an almost instant cure for depression, sleep deprivation! Now, if you only saw the headlines, and we know that many, many people only read a headline before acting on the information, or sharing the information, you might have missed…