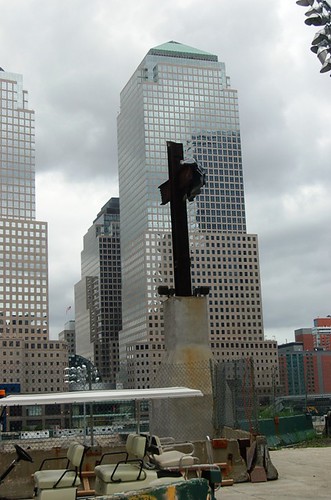 I’ve been thinking about this post for a week. Last Sunday, as part of our daytrip to New York, we made what can only be described as a pilgrimage to the World Trade Center site. The site, as shown above, is not just your normal construction site.

Awhile back, when someone was talking about the 9/11 movies coming out, they mentioned that it might be good to remind people who’ve forgotten about what happened. I’ve never had that problem. I grew up being able to see the towers from my backyard. I have plenty of kids I grew up with working for the NYPD or NYFD, or were affected in different ways by that day. I spent that day wondering about my own aunt, who worked in one of the other trade center buildings. (It turned out she was still on her way there from a doctor’s appointment but was unable to let anyone know she was ok until that evening.) I really have no need to be reminded of what happened.

Given that, it was no surprise that being at ground zero was an emotional experience for both of us. At the same time, I’m absolutely glad I went. I learned so much about what is still there. I learned the story of Saint Paul’s Chapel, I saw that the city is still scarred by what happened, and yet resilient enough to go forward. I saw a city that needs no reminders of 9/11, and one that will create it’s own reminders when it’s time for them. Most of all, I found my own strength as well. I had my time to be sorrowful, and then the gentle reminder that life has gone on, and no matter what, will continue to go on.

So go, if you have the chance and haven’t been. Go, pay your respects to those who lost their lives there, and then continue on and visit the rest of the city, and live the rest of your life to the fullest. The highest honor you can give to them is to let that day be an inspiration for you in your own life. Let them inspire you to overcome your past and live your life to it’s fullest potential.

I saw this quote from Robert Frost the other day and I thought that it was one of the one-liners that really explains exactly how the healing and recovery process continues, even when it doesn’t appear to be. In three words I can sum up everything I’ve learned about life: it goes on. I couldn’t…

In my quest to try every new piece of social media tech that exists, (that might be a bit of hyperbole, but not by much!) I have penned a piece with some career advice called The Appreciation File over on LinkedIn. It did not escape my notice, however, that this same bit of helpful advice…

You may have seen someone talking about this on social media, or in an article online, or somewhere else. I’ve seen it in numerous places. The idea is that, right now, with a pandemic, racial justice issues, and everything else that we are dealing with, suddenly talking about anxiety and depression, or being lonely and…

One of the personal notes I wanted to share about the book review I posted last week, is that there was a quick blurb in the book about how Susan likes to bring in the significant other of someone she is seeing, especially when they are in therapy for a sexual-related trauma. She wants to…

That day is today. The December solstice. Up here in the Northern Hemisphere, it’s the shortest day of the year. (As defined by hours of daylight, obviously) For my readers in the Southern hemisphere, it’s the opposite, it’s the longest day. (Enjoy the summer my Aussie friends!) So in a very scientific and real way,…