Recently, an old friend started going through some old photo albums and scanning in the photos in order to share them on Facebook. She and I were in the same church group back in those days, and many of the photos, despite being a cringe-worthy reminder of some the things we did in our younger days, have also brought back a lot of memories.

For example, here is a much, much, younger version of me, soulfully breaking down a Muppets song.* Because, you know, that seemed like a thing. 😉 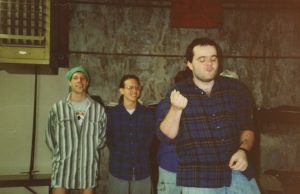 OK, now that we’ve gotten the explanation for the photo out of the way, back to the point of this post. The thing about seeing photos of yourself from over 20 years ago is that once you remember the moment the photo was taken, and maybe smile about it, then you start to think about everything else. As I looked through my friends photos, there were some laughs, but also photos of people who are no longer with us, photos of close friends who I lost contact with years ago, and memories of other events that weren’t as much fun. There were people who I hurt when my depression got really bad, people who hurt me, and a whole lot of other messiness that tends to happen when you’re trying to heal from childhood abuse and also deal with mental health issues.

To put it bluntly, while I don’t regret the healing that has taken place in my life and where I am now, I have to also acknowledge that getting here was messy. I’m not the same person I was in this photo. None of us are the same people we were back then, but for survivors there is a particular challenge that comes with healing. You have to be willing to change, and if I know anything about change, I know it, too, can be messy. Change requires us to leave behind things that are not good for us, which just so happen to be the things we’ve gotten quite comfortable with.

As children, we learned to cope with the unpredictable nature of being abused. For some, it was whether someone was drunk or sober, or whether they were in “the mood” to molest us or not that determined our daily situation. It was all completely out of our control, so, naturally, as adults, we love consistency and control, to a fault. I’ve known many a survivor to stay in bad relationships, bad jobs, bad locations, just because it was consistent. Sometimes, healing is about more than being comfortable. I’ve probably done more healing by doing things that are completely uncomfortable than anything else. Going out and trying something new, or taking a chance on yourself is a great way to gain self confidence and grow as an individual. But sometimes, doing so means that you might fail, or people around you may not come along. Like I said, it’s messy.

But the biggest thing I take away from those photos, and all of the memories that they bring back, is that I survived even the messy stuff. I may not be proud of everything I did during the messy years, but I’m still here. And why shouldn’t I have survived that? I survived being abused in the first place!

So did you. You’re a lot stronger than any messiness that comes from change. The people that matter will see that and accept you for it. I know that the people who accept that I am where I need to be, and forgive me when things get messy, are the ones I value the most.

Find those people, and always remember that you’re capable of so much, even when things don’t go exactly as you planned.

*For reference, this is the actual song we were doing as part of a skit –

Thanks go out to Tiffany as well, for letting me “borrow” this photo, and for bringing back all those memories too, even the ones I’m not proud of.

I wrote this about the day over on my tech site: “As most of you know from reading my sites, I very closely identify myself with my Irish heritage. I’ve spent a lot of time studying Irish history, as well as the history of Irish-Americans. I have a great respect for the people of Ireland…

Tomorrow I get to do something that, according to statistics, is one of the things adult survivors of sexual abuse dread the most. I have to have some dental work done. I was terrified going to the initial appointment for an exam, I’m terrified of going back to have this work done, and I’m terrified…

And we’re off! I’ll be in Boston all weekend, and Monday for an extended weekend. It’ll be a nice little break from the monotony that has become everyday work life. Hopefully I can come back Tuesday and feel somewhat refreshed, and have killed the road trip crave for a little while anyway!

I’ve been thinking about this topic for awhile now. Some of it has been brought on by hearing many of the comments about the Joker movie, some by the way people react to violence, and even some on the way political discussions tend to take place in the US these days. It all came together…

I read with great interest Marj’s post about feeling grief as opposed to dissociating. One, because I also was diagnosed with one of those “other” dissociative disorders, with fugue being the “major” symptom. But secondly, because my history of dissociating has been a concern of mine recently. I’m due to have some minor surgery in…

Since we currently have somewhere in the area of a foot and a half of snow on the ground, I’m feeling very glad to have the President’s Day holiday off work. We don’t have to go anywhere today, and it looks like the most logical thing to do in this weather is exactly that, go…