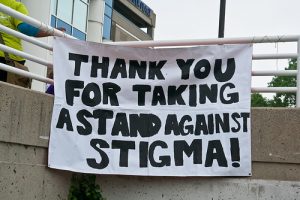 Earlier this week, over on the News and Reviews area of the site, I linked to an article that told the true story of just how people struggling with mental health were much, much more likely to be the victims of violence and not the perpetrators. Naturally, as recent events have unfolded, once again we are looking into the lives of people who have committed evil, heinous, violent acts, and naturally much of the media, and public’s attention has been focused on this “unstable” person.

I don’t think most, not all, but most, people who commit these acts are mentally ill. Not at all, but I understand why most of us would prefer to think that they are.

It comes down to your worldview.

It has become popular, nay, it has become dogma, in the Western world, that the human race is evolving, and getting better. That we will, eventually, create the utopian world we dream of, once we can re-educate all those people who disagree with the enlightened ones.

I think that is complete BS. The human race is not evolving toward goodness and utopia, human nature is simply human nature, and it really hasn’t changed much over the centuries. Human beings are capable of amazing acts of kindness and love. We are also capable of hurting each other in unbelievably cruel ways. We are neither wholly good, nor evil, but a mixture of both, blended together in a being that is bent toward our own self-preservation above all else.

A couple of years ago, I wrote about visiting Rome:

Looking back at the Romans, the gladiators, slaves, Jews, Christians, and others who were killed in the arenas simply weren’t real people. They might as well have been television characters for all the typical Roman citizen knew about them or interacted with them. So, since these weren’t “people” in the same sense that the people I work with, live with, and interact with, it was easy to start to explain away treating them as less than human.

We like to think that only someone unstable would commit these type of crimes. So was the entire city of Rome mentally ill, or was something else going on? It’s my belief that something else was going on, and that was the ability to see those that are different than us as somehow less than human.

Over 2,000 years of human evolution later, and that simple reality has not changed one iota. Oh we don’t hold games anymore, but we absolutely continue to dehumanize people who are different than us. Whether that difference be one of color, gender, sexual identity, culture, religion, political ideology, or what we eat, one only has to look at Twitter for about two minutes to see many, many people treating other human beings as less than human.

And before you get all high and mighty about this fact, I’m not just talking about the people willing to post racist, sexist threats. I’m also talking to you if you think people who go to church are horrible human beings, or every gun owner is responsible for murder, that people who disagree with you should be put in jail, or not allowed to have an opinion, or prohibited from speaking, and so on. The second you decide that another human being is somehow not deserving of the same freedoms you have, not because they have committed a crime, but because they don’t look, or think like you do, you have no moral high ground to stand on. None. Zilch. If you find it “fun” to fantasize about another human being, no matter how much you may not like them, being killed, raped, or otherwise harmed, this includes you too. That’s not the good side of human nature. That’s is viewing other people as less than human, and from there, it’s not such a long walk to committing murder. It’s not a walk most of us take, but it’s still just a short walk.

But, back to my original point. People struggling with mental illness are not the devil, they are not a violent act waiting to happen, they are not dangerous. They are your children, your siblings, your parents, your friends. The vast majority of them are not at all dangerous, but every time we talk about how dangerous the mentally ill are, we push them a little bit further away from the support they also desperately need.

Given the response to my last post, and the discovery that this month’s blog carnival against child abuse topic is Freedom to Heal, I thought it would be a good time to expound a bit on the idea of taking care of yourself. As the comments point out, survivors often struggling with feeling like they…

I feel like the universe, or someone, something, whatever, is pushing me to pay attention to this subject. Over the last couple of months, I’ve had multiple conversations about addiction, specifically about using drugs or alcohol to self-medicate. The variety of stories that I’ve heard, some first hand, others not, seem to have many things…

Hey guess what? Feeling anxious right now is probably the healthiest and most normal response to what is happening around us that you’ve ever had. 😉 Look, I get it, we are in uncharted territory right now and no one is really sure what comes next. We are seeing the number of people testing positive…

From a mention on OxBlog I found links to humanitarian relief efforts for Iraqis from the Red Cross and UNICEF. We watched them celebrate their new freedom from Saddam’s oppression yesterday, and now these organizations are going to be part of a huge effort to rebuild the country and help it’s people. That’s a pretty…

I recently posted this photo to my photo blog, and as I looked at it, a thought occurred to me. In context, with the other photos I shot that day, I know exactly where it was taken, but without that context, it really could be anywhere. Now, if you go over to the blog and…

I’ve shared some articles recently about this problem, but nothing hits home like, well, home. And seeing the issue right where you live. During a recent hearing about putting a tax on the ballot for the Baton Rouge area to fund a mental health treatment facility, the reporter who was covering the hearing posted this…