A few weeks back, Patricia wrote about being an advocate, and being accused of being “stuck in victim mode” because she continued to talk about child abuse.

It’s something that I’ve been thinking about too. Part of that thought process had to do with some cleaning up of old links that I’ve been doing on the blog, and seeing how many survivors have simply stopped blogging and dropped out of the online community, as well as thinking about some of the things I see online about healing in general.

First, before I even get into my thoughts, let’s make one thing clear. All survivors are individuals, and what works for some, may not work for others. Whether you feel lead to continue being an advocate, or sharing information like I do here, or Patricia does, or if you’d rather spend your time with other interests and put this behind you, is totally your choice. Part of being healed is giving yourself the ability to make your own decisions and have control over those decisions. Far be it for me, or anyone else, to demand otherwise.

On the other hand, part of being healed is being more than “just” a child abuse survivor. That can be a tricky line to walk. I’ve been at this blog for 12+ years now, and it’s still tricky. In fact, maybe it gets trickier the longer I go on, because it would be easy for someone who doesn’t know me to look at this site and come to the conclusion that I’ve been going on and on for almost 13 years about being a survivor of child abuse. Wow, talk about someone who is stuck!

Of course, if you’ve spent much time around here, you know that while this site is part of who I am, it is, by definition, the place where I talk about being a survivor, just like my other sites are where I talk about Sports, Technology, and Photography, and if you see me on Facebook I share some of my personal life there, not to mention all of the things in my personal or professional life I choose not to share online. To me, that’s exactly what healing should look like. Yes, I’m a survivor of childhood abuse, and it’s important to me. Important enough that I want to continue talking and sharing so that maybe I can help some other survivors. I continuously make the choice to do that, all the while living my life the way I want to in every area. It is possible to be a part of a larger survivor community and not be stuck in victim mode, if it is something you want to do.

I watch some other survivors online and while I generally try not to make judgements based on how people interact online, (as Patricia said, there’s a lot going on in people’s lives they simply don’t share online), I can definitely see some evidence of them not being healed in this area. Typically, they do nothing but talk about being victim, their online interactions are very intense and personal, and they generally seem to do nothing but interact online about being a victim. Now, there isn’t anything wrong with that, in fact it can be part of healing, being focused on trying to give back and learn more about what being a survivor means, etc. Healing is a process that isn’t always pretty, and it’s a process we all have to go through, but at some point, healing is about overcoming, and overcoming is about being more than a child abuse survivor. 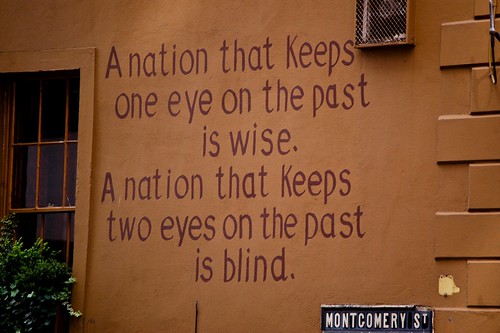 What does it mean to be a survivor? In the most basic sense, it means someone who has survived.

verb (used without object), sur·vived, sur·viv·ing.
1. to remain alive after the death of someone, the cessation of something, or the occurrence of some event; continue to live: Few survived after the holocaust.
2. to remain or continue in existence or use: Ancient farming methods still survive in the Middle East.
3. to get along or remain healthy, happy, and unaffected in spite of some occurrence: She’s surviving after the divorce.
verb (used with object), sur·vived, sur·viv·ing.
4. to continue to live or exist after the death, cessation, or occurrence of: His wife survived him. He survived the operation.
5. to endure or live through (an affliction, adversity, misery, etc.): She’s survived two divorces.

Look at those definitions again. They all talk about remaining, enduring, continuing. An unhealthy survivor sees themselves as a survivor only, but how is that remaining or continuing? Surviving implies that someone existed prior to the event that they are surviving, and continues on after the event. Having survived the event qualifies us as a survivor, but it does not define our entire existence. You existed before you were abused. You continue on after the abuse. Seeing yourself as a perpetual victim, is not healing. Bringing the person you were before the abuse into the present and integrating that person with who you are now, is. If talking about child abuse and advocating for children is part of what you are now, so be it. If it’s not, so be it. But it can only ever be part. At some point the “you” has to remain and continue, if it doesn’t then I’m afraid you might only be surviving in the very least sense of the word, still being alive. (Which is a start in and of itself, but it’s just a start!) There’s more to life than that, and you deserve it. Keep on the journey and develop your own life, as more than a survivor. That is the best way to help other survivors, show them the way.

After spending the weekend at the in-laws for the Thanksgiving holiday, we have returned home, and as is our yearly tradition, Angela and I will make a list of the things we are thankful for. This year my list will be topped off by my health, mental and physical. It’s the top because I know…

Dan was kind enough to leave me a comment with both a pointer to his blog about being a male survivor of childhood sexual abuse, and also a pointer to malesurvivor.org. His blog is intensely personal and quite moving, while the other site is a very useful resource for male survivors.

I saw a few people post about this over the weekend, and then again today I spotted this warning: Police issue a warning about a child pornography video circulating on Facebook As the article points out, sharing that video of child abuse is a crime. Simply being in possession of that video is a crime….

Today is St. Patrick’s Day, and while to many of you that simply means green beer and parades, to me, and many other Irish-Americans it means something else entirely. You see, in Ireland, traditionally, St. Patrick’s Day has not been a big party. In fact, most see it as a very holy, somber day. There…