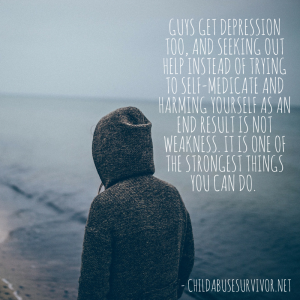 That’s what new studies are telling us.

Over Half of Men With Depression Spurn Treatment

Men and the Stigma of Mental Illness: Depression and Gender

Unfortunately, in many circles, depression is seen as a weakness:

Major depression is a biological, medical illness with physical, cognitive and mental symptoms. Despite clear scientific evidence of depression’s medical and biological links, it remains stigmatized as a sign of weakness or low character.

Acceptance of depression as a verifiable and treatable illness is further complicated by gender bias, leading it to be falsely categorized as a “woman’s” illness. For depressed men, this bias decreases their chances of being properly diagnosed and treated.

Guys get depression too, and seeking out help instead of trying to self-medicate and harming yourself as an end result is not weakness. It is one of the strongest things you can do.

No, I’m not going to suggest that a couple of self-help books here and there are all you need to overcome depression. But, I saw a couple of articles recently that reminded me of my own struggles with depression, and that the best friends, the one’s who can really help and make a difference in…

First, the good news. This article is from Australia, but I feel fairly confident that we’d see similar results in other countries. More and more Australians are being diagnosed with depression and anxiety. But this doesn’t mean Australians’ mental health is worsening. What they did was look back at not just rates of diagnosis, but…

I really liked Natasha Tracy’s description of depression when I read it. I have problems with lots of the little things. Opening mail, for example. You would think that tearing tiny pieces of paper and reading letters would be relatively simple, but it’s not – at least, not for me. For me, I just think…

You know what? I was eating my lunch and the screensaver came on my PC this afternoon. My screensaver in XP is set to randomly show pictures from the My Pictures folder, and I put a bunch of different pictures from different trips in there. Now normally that isn’t exactly news worthy, or even blog…

“Giants are not as strong and powerful as they seem” – Such an important lesson for anyone.