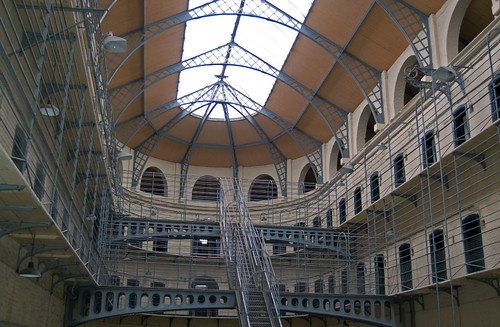 I don’t know if it’s a coincidence, but I’ve seen four different articles in the last week that all point to something that has always bothered me about all the talk of sexual assault victims and people dealing with mental health issues. It seems as though there is one group of people who we are more than happy to make rape jokes about, stigmatize, and refuse to have sympathy for, those who are in some kind of prison.

People, adults and children, who get put in prison, for any reason, instantly become the “other” to many people. Since they are somehow not human any more, when we talk about survivors, or those with mental illness, we don’t include them. It’s as if it’s OK that a 15 year old kid in prison is forced to have sex with a guard because, well he’s male, and he’s a delinquent. No sympathy here.

There was a time when prison was considered a place to rehabilitate people who had gone awry of the legal system. The hope was that teaching them a work skill, or providing therapy, could lead to a change in their personality and they could rejoin society as a productive member. But that ideal has been completely lost over the years. Now, prison is all about punishing people, so if someone happens to get raped while in prison, that’s just great. If they get tortured instead of treated for mental illness, fantastic! If they’re just juveniles, well that will teach ’em to break the law!

We don’t say those sorts of things about any other victims of assault or mental illness. Just because someone is in prison, doesn’t mean they don’t deserve the same protections, and sympathies. People in prison are just as human as everyone else. Sure, they have done some things that don’t elicit sympathy, but I’ve know lots of survivors over the years who aren’t in prison, but don’t exactly come across as friendly, sympathetic, people either. We don’t treat them the same way we treat prisoners.

They have parents, families, friends, etc. who care about them, and they didn’t ask to be raped. If you can’t wrap your head around that, then maybe you aren’t as tolerant and sympathetic as you claim to be.

Ever since Marj mentioned that she was giving this month’s edition of the Carnival Against Child Abuse a love theme, I’ve been struggling with what I wanted to say about love. Obviously, with tomorrow being Valentine’s Day, the idea of romantic love is in the air, but that is only really part of love. A…

I got an email this morning from Neil Ahern, author of a book titled AN INCH FROM MURDER My Life As A Male Victim Of Sexual Child Abuse. That link will take you to an explanation of the book and of Neil himself, but he has also started up a weblog which, in his words:…

I feel fairly certain I have never read a worse example of how certain worldviews will have to end up blaming the victim for their own suffering than this quote from an article about how we can fetishize “surviving” during difficult times, often taking more interest in things like the Holocaust:

Recently, a textbook required for the UNC minicourse “21st Century Wellness” was skewered for suggesting—as a headline read—“Holocaust victims who died failed to find their inner strength.” The actual text included: “The people in the camps who did not tap into the strength that comes from their intrinsic worth succumbed to the brutality to which they were subjected.”

I realize that this seems shocking that anyone would believe this, but I have a different take on it. Why wouldn’t some people believe this?

Something in Douglas Welch’s latest Career Opportunities column about Ugliness and Beauty struck a chord with me. In it Douglas urges his readers to consider their daily actions and whether they are creating beauty in them or ugliness. Recently I have had reason to communicate with a few folks at work that I normally don’t…

Found another blog being written by an abuse survivor over the weekend, Shattered Dollhouse. Seems like I’ve been finding a few more lately, or maybe they’re finding me, eh? Obviously I’m glad to see more people openly talking about abuse and surviving, but at the same time, I’m sad that there are so many of…