If you’re not familiar with the now somewhat famous ACE studies, what we are talking about here are studies that seemed to show that the more Adverse Childhood Experiences you had, the more likely it is that you will deal with bad outcomes in adulthood. The original studies got a lot of media attention, deservedly, but also because the numbers as reported made for really great headlines.

As subjects filled out the questionnaire, reporting on how many of the listed experiences they had, child abuse, domestic violence, mental illness in the house, death of a parent, incarceration of a parent, divorce, etc.

What they studies showed was that if your score was 4, or higher, the prevalence of bad outcomes went up exponentially.

Those numbers got the headlines. That’s actually fair, the numbers are shocking. But, as much as those numbers got attention, there have also been a few articles that critique the entire subject of ACEs.

So, who’s correct? I decided, the best way to get an answer for myself was to go look at the actual numbers, from the original study. Sure enough, it’s clear the reports were accurate about the increases: 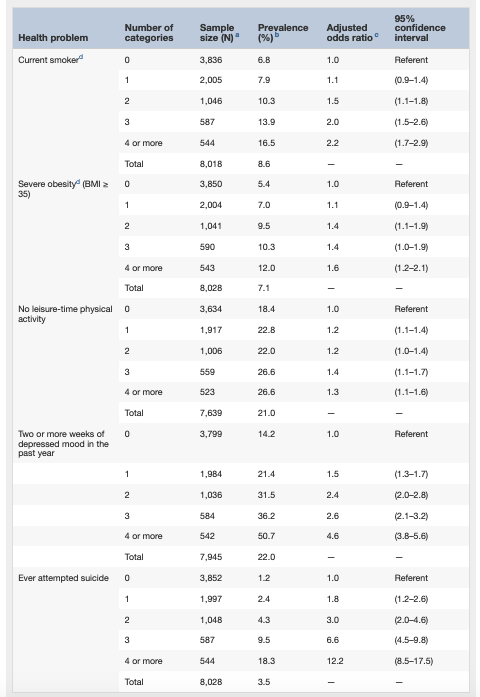 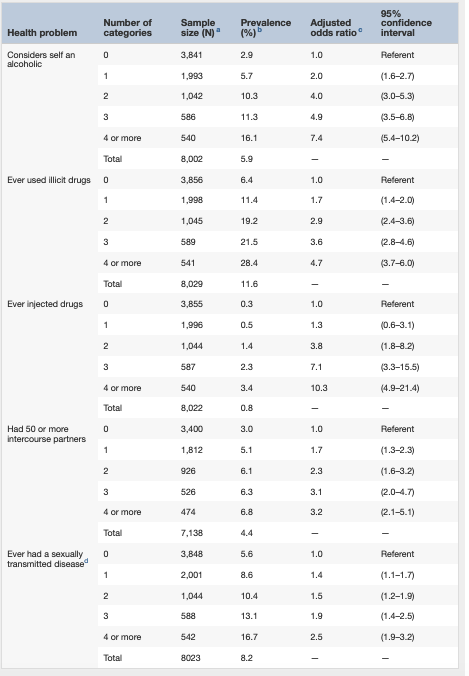 These numbers show us how, for each category, as you start with zero ACEs and go up to four or more, the percentage of people reporting these various “bad outcomes”, go up, some WAY up. This is exciting news. We can see a pattern of childhood trauma and stress creating health and well-being issues in adulthood. There are also charts that show increases in physical health issues. We’ve been seeking ways to lower the number of smokers, addicts, people with depression and anxiety, etc. and here we have a sign that childhood trauma prevention and early intervention and support for the adverse experiences we are unable to prevent, could put quite a dent in the numbers of adults struggling with these things. For advocates of child abuse prevention, and early childhood treatment, this, and further studies that have confirmed the corollary, give us something to point out the need for these resources and programs, and a way to measure the success of those programs.

This is, in my opinion, a fantastic thing. So, why the criticism?

Well, actually, again, in my opinion, that has less to do with the study than it does our inability to fully understand statistics and probability.

The increased risk is there. I don’t question that. But, it’s not the whole story. Let’s go take a closer look at the numbers around depression as an example:

Look at that increase, 4.6 times as many people who had 4 or more ACEs are possibly dealing with depression than those with zero. A full 50.7% of the people with 4 or more report struggling in this area.

When I stop to consider those final two points, I understand why there is criticism. It’s not so much about the study, or subsequent studies, it’s what we do with those numbers. When we advocate for resources, and policy decisions, to assist with ACE prevention and treatment, we cannot forget the people who are struggling for entirely different reasons. We do not need one treatment and support option, we need a buffet table full of options. Looking seriously at childhood stress and trauma should be one thing on that buffet. So should a number of other things, to treat a number of different mental health conditions that are not even dealt with in this study. We also need to stop and consider the ramifications of classifying the results as fate. Yes, childhood can set us up for an increased risk statistically. But we need to be careful how we interpret that and treat people. Our ability to get life or health insurance should not be based on this, for example. We shouldn’t be assuming someone with a high score is an addict, or is at risk for obesity.

That’s the thing about statistics and percentages. They can help guide us to ways to help more people, and recognize risk factors. But if I point you to one individual, they don’t really tell us much about that person.

Is that one person with a high score part of the 50.7% who may be dealing with depression, or the 49.3% that isn’t? Is the person who scores a zero at no risk for suicide attempt or addiction? Obviously, no. There are an infinite number of possibilities when it comes to one person. The statistics don’t mean much. We’d do well to remember that as we start building AI and big data risk models.

It does, however, represent a chance to help lower the prevalence of these things across an entire population. For that, we need to use them to encourage more resources for prevention, right alongside more resources for research and treatment options that have nothing to do with ACEs. We can do a lot more, for everyone.

For more reading, and alternative views that I’ve seen recently:

Good intentions but the right approach? The case of ACEs

Why you need to remain critical of ACEs (Adverse Childhood Experiences)

Adverse childhood experiences and how to recover from ACEs

Also, I highly recommend this episode of Dak Shepard’s podcast Armchair Expert with Johan Hari, where they discuss many things about addiction, childhood trauma, mental health treatments, etc. It’s lengthy but worth it: (I may have a few other posts based on that discussion, after I give it a second listen)

As I’ve worked at trying to be a better friend, more thoughtful, more alert to situations where I can offer support and/or help, I find that one of the most frustrating things is trying to help someone who won’t help themselves. We’ve all been in these types of situations, and often friendships can literally end…

One of the posts I’ve been looking at quite a bit from the last Carnival Against Child Abuse is this guest post by Stephanie Gagos about self-esteem. One of the ideas that strikes me, especially given the time of the year is the idea towards the end of balancing accepting yourself while also striving to…

In light of yesterday’s news about Robin Williams, lots of folks have been reaching out on Twitter, Facebook, and other social media to share their own stories of depression and other mental health issues, or make sure folks know where to go to get help, and that there is help for mental illness. I even…

Every now and then, I take a look at how much work I put in on my two sites and how much feedback I actually get from people, and I am just amazed that anyone even reads all the stuff I write, let alone appreciates it enough to write me about it. I guess that’s…

Saw this morning that Doc Searls’ mother had passed away yesterday. I think Doc’s words about it are a fitting tribute to a woman who lived a full life and left an impact on many lives. I think the words from this post by Sandee about her friend passing away from cancer sum up exactly…